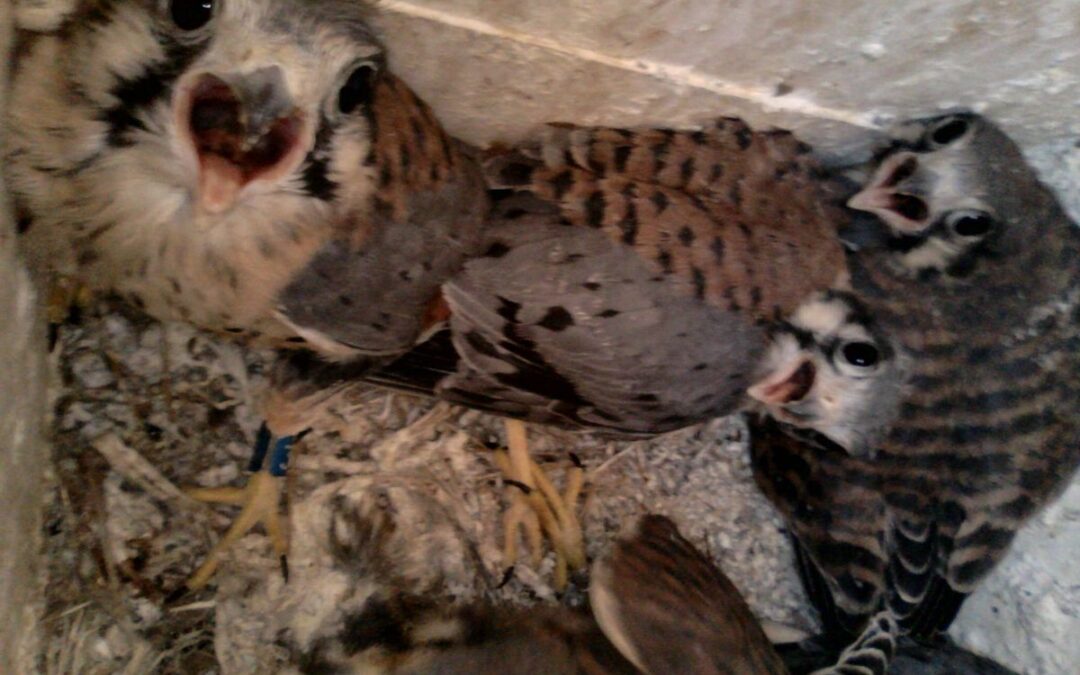 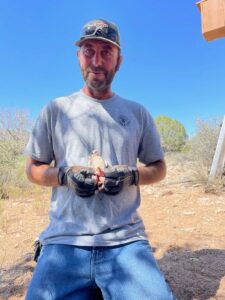 The American Kestrel is North America’s smallest and most colorful falcon. Many adore kestrels for their lovely plumage and big personality. Unfortunately, this historically common little falcon has become a rare sight in many regions of North America, where populations have been declining for decades.  Development, climate change and pollution are impacting habitat for these birds.  Volunteers have joined the USDA Forest Service effort to monitor and expand kestrel nesting sites.

In the 1800s and early 1900s, many referred to American Kestrels as “sparrowhawks”. The American Kestrel’s Latin name, Falco sparverius, means “Falcon of sparrows” – a reference to this falcon’s habit of occasionally taking small birds as prey. Insects and small lizards fill out the diet in the wider Verde Valley area.

American Kestrels are approximately the size of a jay, with the slender, pointed wings and long tail typical for falcons. They are approximately 9 inches long from beak to tail tip, and their wingspan is about 22 inches. Adults weigh an average of 4 ounces. As with most other birds of prey, the female kestrel is larger and heavier than the male.

The Kestrel’s decline has highlighted the need for improved nesting habitat as well as nesting data. Such data offer insights regarding the kestrel life cycle. Responding to this need, the American Kestrel Partnership coordinates a network of professional and community scientists who monitor nest boxes and contribute data to a single database. With this information, trends can be identified to understand the causes of species decline.

Red Rock Ranger District Biologist Janie Agyagos said, “I’ve anecdotally noted fewer and fewer observations of kestrels in the Verde Valley, so when I found out about this nation-wide citizen science effort, I was thrilled when Friends of the Forest jumped on board and took this program over.”

Agyagos continued, “So many species are experiencing declines due to overlapping stressors such as habitat modification, overharvesting for commercial purposes, disease and predation, and natural events like drought and fire which are exacerbated because of climate change.  For kestrels, one way to help is to improve nesting habitat.  It’s most important to recognize declines and act before species need official regulatory protection such as listing under the Endangered Species Act.”

Friends of the Forest joined this effort in 2020 with volunteers from its Wildlife, Fish and Rare Plants team.  Currently, six volunteers monitor thirteen boxes in the Red Rock area. 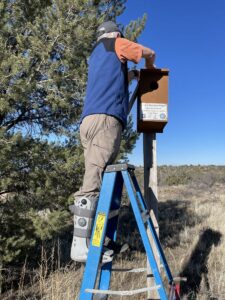 Kestrel boxes are typically constructed of one by twelve-inch white pine.  Boxes are placed at least ten feet off the ground, and at least a half mile apart away from roadways.  An open habitat with perching opportunities and afternoon shade are important. Box bedding in our area is usually ponderosa pine needles, which are thought to have anti-microbial properties that may reduce respiratory illness in the falcons.

New boxes are installed during the October to January non-breeding season. Established boxes are checked and cleaned. This past October, my wife and I hiked to each of our assigned nesting boxes in the Rimrock area with a step ladder, bag of pine needles, cleaning scraper, gloves, and masks to protect from possible avian infectious disease.

Our boxes are each a quarter mile or more from the nearest road and a mile or more apart.  Starting in February we will check the boxes for activity every other week.  Early activity is usually feces, food remnants and disturbance of the needles. Records of what is seen inside the nest are entered in the American Kestrel Project’s database.

If lucky enough to have a successful nesting, it is typically twenty-eight days to hatching of eggs. At this point, monitoring becomes every ten days. Hatching to fledging, or leaving the nest, is usually around four weeks.

For the past two years we have coordinated with Arizona Game and Fish to band the chicks around week three, typically with the parents soaring above and occasionally swooping us. 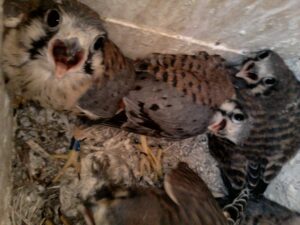 Friends of the Forest efforts saw nesting and three eggs in one box in 2020 but unfortunately no hatchlings. Heat was suspected as a possible issue and many boxes were relocated to areas with greater shade. 2021 saw nesting and five eggs in a box in the Rimrock area. All hatched and the young were banded. Four of the five fledged. 2022 saw nesting and four eggs in a different box in the Rimrock area. All successfully hatched, were banded, and fledged. 2023 will see Friends of the Forest, Red Rock Ranger District and Arizona Game and Fish continuing our efforts.

Serving Sedona, written this week by Dale Evans of Friends of the Forest, appears Wednesday in the Sedona Red Rock News. 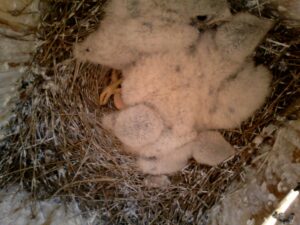